Everyone told us that the first year of marriage was tough; they probably don’t crossfit…..

My wife Maureen and I have been married for a little over a year now and it has been quite the ride. She is originally from Connecticut and I’m from Massachusetts. She made a huge sacrifice and moved here after the wedding so we could start our lives together. The transition away from home wasn’t easy; she and I struggled as we tried to adjust to our new living situation.

A year prior to the wedding, in a very cliché move, I told myself that I was going to get in shape for the big day. For 12 months I did the typical 20 minutes on the elliptical followed by some pushes and pulls; arms twice a week. (Just in case the sleeves fell of my tuxedo) Maureen did the same: a half an hour on the treadmill and countless ab machines. The wedding came and went, we saw minimal results from the work we put in, and we were getting bored with the same old routine. More importantly, we were spending the little time we have outside of work separately. It was time for a change.

I heard about Cross fit from a co-worker who knew some members at a local gym. Becoming more interested by the day, I started watching YouTube videos and incorporated some of the movements into my routine. After just a short time I knew we had to give it a shot.  I obsessively tried to convince Maureen to join a Crossfit gym with me. We went back and forth with your typical list of concerns: too expensive, I don’t want to look muscle-ly (this was her not me), I’m not in shape etc. etc. Eventually, after a few months of this she caved. It may have been that she just didn’t want to listen to me anymore but either way she caved. We started to shop around for gyms and narrowed it down to a handful in the Merrimack Valley/Southern NH area.

To be perfectly honest, the price was the first thing that drove us to Crossfit Free. Compared to the other gyms in the area, the monthly fee was extremely reasonable. It didn’t take long for both of us to realize that this isn’t what kept people there. It was the coaching staff, competitive atmosphere, and community. For the past 9 months everyone at CFF, from the staff to the other members, has been a part of the progress that both Maureen and I have made. It’s amazing to see how hard work pays off, and that’s what keeps us coming back.

We started something that, without even knowing, would change our lives as individuals and as a couple. In the 8 years I’ve known Maureen I don’t know if I have ever seen her more confident in herself than she is now. We’re able to enjoy this experience together and that’s what really counts. I think it’s a direct result of the coaching and encouragement Brandon, Justin and the rest of the community provides.

We appreciate everything you do! 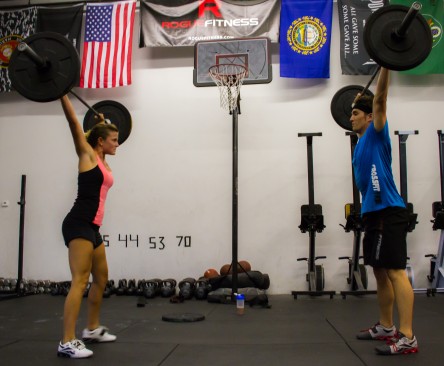